The town of St Mere Eglise: The iconic image of Paratrooper John Steel caught up on the church steeple is another legend captured in the epic film “The Longest day”. He and his colleagues were mistakenly dropped into centre of the town and many were killed by the German defenders. We visit the St Mere Eglise Airborne Museum which overlooks the famous Church Square, and which tells the incredible story of the 82nd and 101st Airborne Divisions’ battle.
. 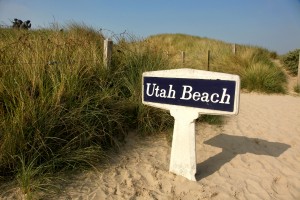 Utah Beach: At the western end of the landing areas, Utah Beach was a key objective of the plan to capture the strategic port facilities at Cherbourg. In addition to the standard German defences including gun batteries and obstacles on beaches, the Germans had also flooded the coastal marshes behind the beaches. To secure the area and protect from German counter attacks, US Airborne forces were committed, including parachute troops and gliders. We will visit Utah beach, the excellent museum, and several notable sites that characterise the sector
.